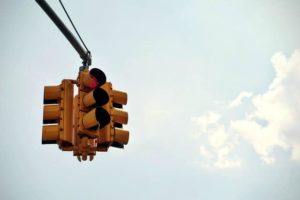 There are many situations in driving where one car should let another car pass or go first. If there weren’t laws governing right of way, the number of accidents would increase because many drivers would not give any right of way. Even with current laws in place, there are more accidents and injuries than there need to be because some drivers simply disregard the law when it suits them.

In Florida, as in most states, there are a few different traffic light configurations that govern when a car can turn left, particularly in busy intersections. When two high traffic streets intersect, the traffic light usually gives a green turn signal for cars wanting to turn left, while all other traffic stays stopped. Then the turn signal turns red and lets the other traffic go. This reduces the amount of accidents that occur when giving the ability to turn left while opposing traffic also has a green light.

The car turning left in the above scenario has to yield the right of way to any oncoming traffic. When cars turning left try to make it before oncoming traffic reaches the intersection, there is a high risk of an accident. When drivers are in a hurry and don’t want to wait, they put others at risk for an accident and serious injury.

Common Accidents From Failure to Yield Right of Way

The busier the intersection, the more potential there is for an accident to occur from cars failing to yield their right of way, because there are so many more cars and it gets harder for drivers to make a left-hand turn without waiting for the next light cycle.

Here are some other situations where failing to yield the right of way can cause an accident.

Compensation You Could Receive

Accidents that are caused by one or more drivers failing to yield the right of way can result in injuries ranging from mild to very serious, depending on the speed of the cars and where the impact occurred on the vehicle. As in any type of car accident that is caused by the negligence of another person, there are several types of damages that you could be entitled to.

Economic damages are usually awarded to compensate for losses incurred for being out of work, replacing or repairing the vehicle, having to rent a car, medical bills, and ongoing medical treatments. Non-economic damages cover other losses like pain and suffering and loss of companionship of a spouse.

If you have been injured in an accident because of the other driver’s failure to yield the right of way, you may be entitled to compensation for damages. Call our car accident lawyers at Zervos & Calta, PLLC for a free consultation so we can go over your case and your legal options.