Skip Navigation
Home Blog What Causes 18-Wheelers to Roll Over

What Causes 18-Wheelers to Roll Over 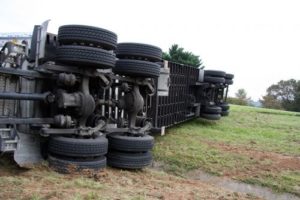 According to statistics published by the Federal Motor Carrier Safety Administration (FMCSA), approximately five percent of truck accidents involve rollovers. 18-wheelers are prone to rolling over owing to size and load distribution factors. Reports show that 18 wheeler rollover crashes often lead to catastrophic personal injuries and fatalities. The causes of these types of accidents include blown tires, over-correcting, a shift in the load balancing, and hard braking. Please contact our truck accident lawyers if you have been injured in a trucking accident.

In many cases, drivers contribute to 18 wheeler rollover accidents, owing to the failure to control the truck when faced with tricky road situations. An inexperienced driver may lose control after changing lanes quickly or braking hard. Over correcting often leads to rollovers as the driver’s remedial actions compound the situation. Over-steering and under-steering have been shown to compromise the stability of the vehicle.

Meanwhile, experienced drivers tend to react more appropriately in situations that require steering correction. For this reason, drivers need special training to prepare them for various types of road situations. The majority of instructions relating to the prevention of rollover truck accidents are available in printed format. However, many experts believe that learning materials in video format enable drivers to recognize incipient rollovers. Simulation is even better for helping truck drivers gain insights by experiencing the ramifications of bad judgment.

A study by the FMCSA revealed that failure to reduce speed when approaching curves causes up to 50 percent of truck accidents, including rollovers. Some accidents occur due to problems with the braking system or intersection conditions. Poor concentration and improper steering input often lead to rollover crashes.

When a driver inadvertently dozes or falls asleep, the truck may roll due to a sudden change in direction. On the other hand, failure to load the vehicle properly also contributes to many eighteen-wheeler rollover accidents. The weight and height of the load placed on the trailer influence the truck’s overall balance.

Load Balance of the Truck

Centrifugal forces have an impact on a truck’s behavior when it enters a curve. The high center of gravity associated with semi trucks makes it easier for a truck to roll over when it leans on the opposite side of the curve. It takes less centrifugal force to roll the vehicle. For this reason, truck drivers need to reduce speed when approaching a curve on the roadway. Some trucks roll over after jackknifing.

Overloading the truck exacerbates the risk of 18 wheeler rollover accidents. The load carried on the truck can shift during the trip, which poses a significant rollover risk. The FMCSA requires truckers to follow specific rules when it comes to securing cargo on trailers.

The purpose of the rules is to minimize rollover risk in various road conditions. The recommendations for securing cargo helps prevent shifting while in transit. When the load shifts, the driver will experience difficulties controlling the vehicle.

Trucks that are not roadworthy and those with under inflated tires are also prone to rollover crashes. Truck drivers must inspect the tires and loads of their truck before beginning a trip to ensure safe driving. Our Tarpon Springs truck accident lawyers can provide legal assistance when you are faced with problems or injuries associated with a truck accident.