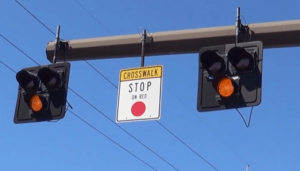 A pedestrian is hit by a driver every 7 minutes in the United States. The area with the highest rate of pedestrians being hit and injured is in the Orlando area, with 2 pedestrians suffering injuries and 1 being killed every week. In 2017 there were 781 injuries and fatalities in Orange County alone. Lake, Osceola, and Seminole counties had a combined 418, so Orange County is far more dangerous than the surrounding areas. Over the last decade, the Orlando-Kissimmee area has consistently been ranked as the most dangerous place for pedestrians with the number of pedestrian accidents that occur there.

The main objectives of the initiative are to reduce pedestrians being hit by vehicles while in a crosswalk. The initiative is measuring how well drivers yield to pedestrians in certain crosswalks that are being monitored. Adding high visibility to warn drivers of someone entering a crosswalk, and enforcement by police giving citations, has been a big help. In the past six years, thousands of citations and warnings have been issued at marked crosswalks, and the number of drivers yielding to pedestrians has increased dramatically.

In Tampa Bay, the use of Pedestrian Hybrid Beacons has been effective in reducing the number of bicycle and pedestrian accidents on high-speed or busy streets for crosswalks that are in the middle of the block. Throughout the state, locations that have been shown to have a high number of pedestrian accidents are having the existing pedestrian traffic signals wrapped with reminders for pedestrians to cross in the crosswalk and to be safe.

Pedestrians are at a disadvantage when crossing roads, even when using a well-marked crosswalk with a crosswalk signal. Walking without paying full attention to what is going on around them, and cars making turns mean pedestrians need to be fully alert and aware when crossing a street that has heavy traffic. Some crosswalks in Clearwater and Tampa have put in place the use of reflective flags for a pedestrian to use when crossing the street. The pedestrian picks up a flag at the corner and holds it up as they walk across the road, which helps increase their visibility to vehicles. This is to improve safety in crosswalks where there is no crossing signal.

Pedestrians are responsible for their own safety, which means being vigilant, aware and alert as they cross roads and highways. They will always come out on the losing end of an encounter with a car, even when it’s not their fault, so that means staying off phones and monitoring what traffic is doing. If you have been injured as a pedestrian and feel that the driver was negligent or careless, call a Tarpon springs pedestrian accident attorney today to discuss your case.