Do Golf Cart Drivers Have to Obey Texting and Driving Laws in Florida? 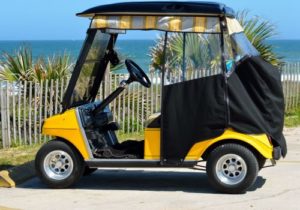 The grace period for golf cart drivers to not receive tickets for texting while driving expired on January 1, 2020. The new laws went into effect July 1, but the Florida Highway Patrol gave a grace period of six months where drivers would only receive a warning instead of a ticket with a fine. The question is, do ALL golf cart drivers have to obey the new laws?

The answer to that depends on how the law defines what a golf cart actually is or isn’t. In some areas of the state like Satellite Beach, if a golf cart is street legal, it is permitted on neighborhood roads. In Viera, FL, golf carts are sometimes used on the sidewalk to drop children off or pick them up at school.

According to the Florida Highway Patrol (FHP), if a golf cart is registered and being driven on a road, no matter how fast or slow it’s going, then the new laws apply to the cart driver. It all comes down to a matter of safety. If being driven on a road, texting while driving a golf cart is distracting and cause a car accident or pedestrian accident.

Videos of high school students texting while driving a golf cart emphasize the fact that it can be difficult to keep control a cart while texting, and if they are going fast at the same time, then it is even more dangerous.

A bill was filed in September 2019 due to come up in session in 2020, that will make it illegal for any person to drive any vehicle at any time while they are physically holding or even touching their phone. That means cars, trucks, and golf carts. Right now, 20 states have laws making it illegal to hold your phone while you’re driving.

Some communities in the state like the city of Satellite Beach, have local laws or ordinances that allow Low-Speed Vehicles (LSVs) on their streets.

An LSV is a golf cart that has safety features and all of the components to make it street legal. They have to be registered with a tag, as well as carry PIP (personal injury protection) and property damage insurance. So, it’s considered to be a legal vehicle, but has a slower speed than a car. Most communities limit how fast they can go to between 2- and 25 mph. Required safety features can include seat belts, headlights, a reflector triangle on the back of the cart, and even windshield wipers in some cases.

Florida law states that golf carts can only be driven on roads that were built for golf cart use. The problem is, counties differ on how they define “golf cart roads”. They are not supposed to be driven on public sidewalks, though some areas allow them on sidewalks that are 8 feet wide.

Every county in the state of Florida is different in how they define a golf cart, the speed they are allowed to be driven, and whether the cart must have a title, be registered, or carry insurance.
Some counties, like Brevard, don’t call them LSVs, but rather NEVs – Neighborhood Electric Vehicles. Satellite Beach allows NEVs to be driven on the road where the speed limited is 35 miles per hour or lower.

The Difference Between Golf Carts and Low Speed Vehicles

Drivers of golf carts that are considered to be LSVs must obey the new texting and driving laws. It can be confusing to know the difference between a golf cart, generally considered to be what is driven on a golf course, and a Low Speed Vehicle, because they can look very much the same. But there is a difference.

You will need to obey the new laws because your golf cart is an LSV if:

If you have a golf cart and you drive it on your local roadways, learn what your local ordinances are and how they apply to your golf cart. The fines for getting a ticket for texting while driving can be quite large.