Rules of the Road for Bicyclists in Florida 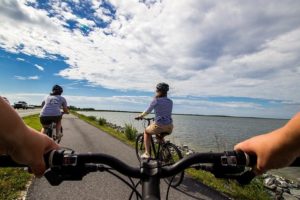 Bicycling is popular in Florida, not only as a fun, inexpensive mode of transportation, but also as a great way to get exercise. Many people love to ride because it’s a good way to be outdoors and view scenery up close. However, it can be dangerous if you don’t know all of the rules of the road. Below are some of the rules that you should be aware of, if you are riding a bicycle on Florida roads. Have fun and be safe!

Right of Way – Bicyclists do NOT automatically have the right away. In Florida, a bicycle is considered a legal vehicle the same as a car, and the bicyclist is a driver. Bicyclists have the same rights to the roadways, and must obey the same traffic laws as the drivers of any other vehicle.

Helmets – If you are less than 16 years old, you MUST wear a helmet while riding a bicycle. The helmet must meet federal safety standards. There is no legal requirement to wear a bicycle helmet if you are older than 16 years of age.

Lights – Florida law requires a bicyclist to have a light on the front of the bicycle between sunset and sunrise. The light must project at least 500 feet ahead. You must also have a red reflector on the back of the bicycle.

Accidents – If you were on your bicycle and injured as a result of an accident with another motor vehicle, your personal injury protection benefits (PIP or no-fault) under your own motor vehicle coverage, will generally pay 80% of your medical expenses incurred for treatment of your injuries, and 60% of lost wages (unless you have an exclusion), less any deductible you may have elected. There is also a $5,000.00 death benefit paid if you die as a result of the accident.

If the other driver negligently or recklessly caused the accident to occur, and you sustained injuries as a direct result of that accident, you can make a claim against or sue the driver that hit you. The value of your case, however, will depend in large part on the extent of your injuries and how have the injuries affected you. Always consult with a bicycle accident attorney to preserve your rights and get a fair evaluation of your claim.